When treating hyperpigmentation skin disorders, sleep, stress, adrenal support, gut, liver and hormonal pathways, inflammation, the skin barrier function and the relationship between the melanocyte and the keratinocyte, must all be considered.

Not addressing the underlying dysfunctions involved in hyperpigmentation disorders can and will result in a rebound effect.

When treating hyperpigmentation disorders, you might want to make sure you or your clients are sleeping well, as melatonin is a regulator of homeostasis in our body not just sleep and it influences the behaviour of our melanocytes.

Melatonin is a sleep hormone mainly produced by the pineal gland through a multi-step process starting from hydroxylation of tryptophan, a process well-known for regulating circadian rhythm. Melatonin is also produced in the skin as well as the nerves and peripheral organs, like the retina, appendix, and skin.

It also has many other effects including regulation of immune and endocrine functions, and it shows anti-oxidative and protective properties against the cellular toxins and internal and environmental insults. These effects are mediated either through binding to membrane-bound melatonin receptors (MT1 and MT2), receptor-independent mechanisms or through activation of putative nuclear receptors, these are a class of protein found within cells that are responsible for sensing hormones and certain molecules, they are transcription factors activated by steroid hormones like estrogen and progesterone, they control gene expression and many biologic processes including cell proliferation and development.

Did you know that melatonin regulates the coat colour in animals?

Melatonin and its metabolites including 6-hydroxymelatonin (6(OH)M), N1-acetyl-N2-formyl-5-methoxykynuramine (AFMK) and 5-methoxytryptamine (5MT) are endogenously produced in the human epidermis. This production depends on race, gender and age. The highest melatonin levels are in African Americans.

Testing of their phenotypic effects in normal human melanocytes shows that melatonin and its metabolites (10−5 M) inhibit tyrosinase activity and cell growth.

Melatonin has been shown to inhibit melanogenesis, it affects tyrosinase activity. Melatonin and its metabolites [6(OH)M, AFMK and 5MT] are produced endogenously in the human epidermis and can affect melanocyte and melanoma behaviour. Additional functions from free radical scavenging and DNA repair via immunomodulation, bodyweight control and the promotion of wound healing to the coupling of environmental cues to circadian clock gene expression and the modulation of secondary endocrine signalling.

Melatonin was confirmed immunobiologically in all segments of the gastrointestinal tract (GIT). Melatonin was also confirmed in the pancreas and the hepatobiliary system. Melatonin is produced in the enteroendocrine cells of the GIT mucosa. The concentrations of melatonin in the GIT are 10-100x higher than in the plasma and the total amount of melatonin in the GIT is around 400x higher than the amount of melatonin in the pineal gland. Like pineal melatonin, GIT melatonin is a multifunctional compound that exhibits some general as well as some specific effects, depending on the organ and the location of GIT tissue. Generally, the episodic secretion of melatonin from the GIT is related to the intake and digestion of food and the prevention of tissue damage caused by hydrochloric acid and digestive enzymes.

The importance of working on good digestive function – 400 times more melatonin is produced in the gut than the brain.

I see so many times where skin therapists focus on removing or getting rid of hyperpigmentation disorders, if they can’t see the pigment, they think it has gone, by laser, stripping the skin disrupting the skins natural barriers and defences, causing inflammation in the skin, which is a major contributor to pigmentation. We need to take a holistic approach to the underlying contributors that are contributing to hyperpigmentation. Things like adrenal insufficiency, stress is a massive contributor to hyperpigmentation. Not sleeping is a stressor to the system and will deplete the adrenals. According to the American Academy of Dermatology, only 10% of people with melasma are men. Melasma is much more prominent in women because of estrogen dominance and low progesterone, you can have low estrogen and still be estrogen dominant.

Stress has a significant impact on our hormone levels, as it depletes progesterone and increases estrogen and cortisol. This increases melanocyte-stimulating hormone (MSH), which means an increase in pigmentation. Hypothyroidism and Adrenal fatigue also have similar effects on progesterone, the result being hyperpigmentation.  Hyperpigmentation in primary adrenal insufficiency is caused by increased production of α-melanocyte-stimulating-hormone (αMSH). 7 Both αMSH and ACTH originate from the pro-hormone peptide pro-opiomelanocortin (POMC). It is caused by the stimulant effect of excess adrenocorticotrophic hormone (ACTH) on the melanocytes to produce melanin. Hyperpigmentation is caused by high levels of circulating ACTH that bind to the melanocortin 1 receptor on the surface of dermal melanocytes.

Another internal factors which contribute to Melasma are poor liver health, as the liver helps remove excessive amounts of hormones in the body. And Poor gut health, as a gut bacteria called Estrobolome, helps to metabolize estrogen, which can also help balance your MSH levels.

Another common contributor to hyperpigmentation is an impaired lipid barrier, and cosmetics that increase inflammatory responses, resulting in hyperpigmentation. Melanocytes are highly reactive to trauma, and oxidative stress. When treating hyperpigmentation look at the relationship between the melanocyte and keratinocyte. This is known as the Melan epidermal unit. Keratinocytes produce cytokines, in response to stimuli.

When treating pigmentation minimise trauma. Damage to epidermal cells can lead to the release of endocrine inducers of pigmentation, such as MSH.

Pigmentation is a complicated and multifaceted disorder; therefore, its treatment requires intervention through various pathways to treat this concern holistically and effectively!

Being a certified and approved Depigmentation Clinic, our long term sustainable results are acheived and maintaining the internal balance, and mostly by Cosmelan and Dermamelan Peels by Mesoestetic.

Client Below had years of persistent Melasma. After over 3 years of initial Peel treatment, the pigmentation reappeared in opposite parts of the face. 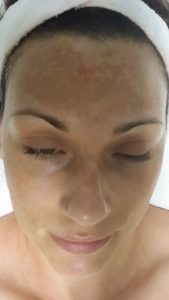 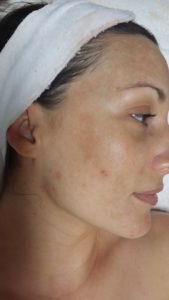 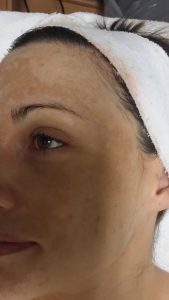 Client below had persistent melasma for 10 years. First row of photos (1.a) are from June 2019 before her first treatment.